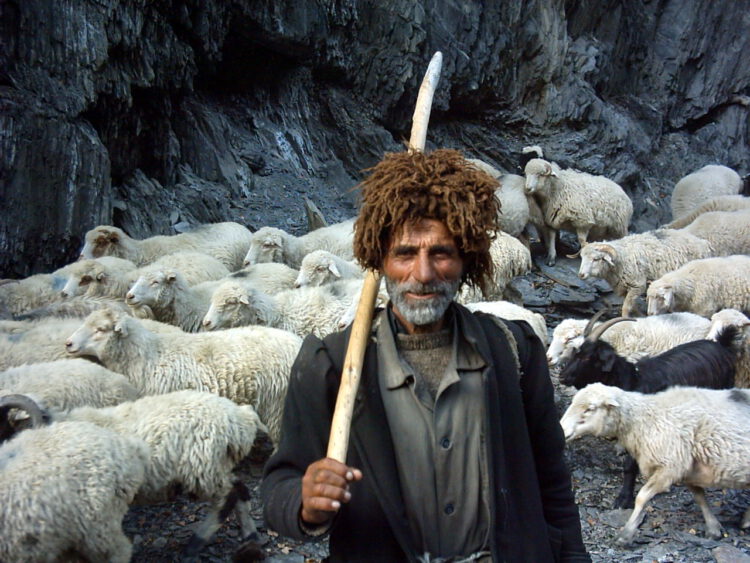 Preservation of a unique cultural heritage in the Caucasus

Historically, the unique culture of the Caucasus area was shaped significantly by the economic activity of its people. In addition to an 8000-year tradition of viticulture in Georgia, there has been a focus on animal breeding.

In particular the raising of farm animals such as dogs, sheep, goats, cattle, buffalo and horses. For the sheep, the lush pastures in the Greater Caucasus mountains at an attitude of 2000-3000 meters provided an ideal basis for summer grazing. The steppes of today’s border region with Azerbaijan at an altitude of 500-800 meters provided the herds with a good supply of grass and water in the winter months.

Domestication of animals such as sheep began around 10,000 years ago in the neighboring region of the Caucasus in Western Asia. The settlement of Tusheti can be proven up to at least 5000 years before the calendar, probably considerably longer. Therefor sheep breeding in Tusheti has most likely existed for thousands of years, as sheep provided people’s vital needs for meat, fat, milk, and cheese. In addition, wool and leather were of value as well. In Tusheti, special adapted breeds of domestic animals were developed for the high mountains of the Caucasus. For example: “Tushetian sheep”, the “Tushetian horse” and the “Tushetian shepherd dogs”.

The Tushetian sheep is relatively small and stocky and weighs around 60-70 kilograms. It is kept outdoors all year round under extreme climatic conditions and covers the distance of 300-400 kilometers twice a year between the summer pastures in the Greater Caucasus and the winter pastures in the southern steppes.

The famous Tushetian “Guda” cheese is made from the milk of the sheep, which are milked from May to July. The meat of the young sheep in particular is very tender and is considered a special delicacy in the Caucasus region. Traditional Georgian dishes are for example the lamb ragout “Chakapuli” or the dumplings filled with lamb and herbs “Khinkali”

The wool of the Tushetian sheep is of particularly high quality. The wool is white, shiny, strong and soft. About 4-5 kilograms of wool are sheared per sheep. The wool is traditionally used for felts and the well-known Caucasian shepherd’s cloaks “Nabadi” and Tushetian headgear are made from it in different variations. The wool is also spun and used to make carpets and fabrics for clothing and household furnishings. The sheep provide food, warmth and are an important means of property and exchange, because the shepherds get the cash they need to pay for expenses and maintain the economy by selling sheep in the autumn after the drive to the plains.

The nomadic  movement of the Tush sheep has been documented since at least the 17th century.  The Kakheti kings gave the Tush pasture in the southern steppes on the border with Azerbaijan. There was enough grass in winter for the flocks of sheep on these pastures.  In addition,  the famous Tushetian warriors served as protection forces and border guards for the Georgian Empire against the Azerbaijani-Turkish and Iranian neighbours and any other invaders. The valuable pastureland had to be defended against the competing herds of the nomadic neighboring peoples. This southern hilly steppe region of Georgia is traditionally called “Shiraki” and it ranges from Rustavi via David Garedji and Chachuna to the border river Alazani and includes today’s Georgian Vashlovani National Park.

In Soviet times, Georgian sheep breeding was standardised and adapted to socialist plans although the main features were retained.  The Soviets arranged for 20 brigades and 50,000 sheep in Tusheti.Each brigade had  2500 sheep, 10 shepherds and 25 sheepdogs. With the independence of Georgia in 1991 and the collapse of the Soviet economic system, a severe, long-lasting economic crisis set in.  However, this led to a revival of traditional Tushetan sheep farming. It was not uncommon for former math teachers or unemployed army officers to become self-employed as shepherds in order to build up a livelihood in the times of crisis or because the profession was previously a family tradition.

With the economic upturn in Georgia due to the “Rose Revolution” in 2003, new, modern branches of industry have emerged. Because of this, sheep farming as a source of income and as a profession is becoming less attractive for a variety of reasons and is constantly declining. It is very difficult for the shepherds today to find a good workforce and to retain their employees permanently. Young people in today’s market find the tough and hard working shepherd’s jobs unattractive.

Today in the 2020s the shepherd tradition in the Caucasus face different challenges.

The demand for high quality meat from mountain sheep increased from the market from Arabic countries.

Tourism in Tusheti resulted in a rise of well paid jobs for young qualified Tushs in the fields of transportation, guiding, accommodation and in the Tusheti National Park.

There are few young people willing to work under the rather harsh conditions of a shepherd.

The old generation of shepherds is retiring.

Basic infrastructure is missing in certain parts of Tusheti and in most parts of Vashlovani, like

Young people are not willing to work under conditions without internet.

The cost per sheep rose remarkable because many formerly governmental tasks are privatized today and cost the sheep businesses extra money.

The prices for the land lease for the pasture in Tusheti and in Vashlovani went up considerably.

The shepherds with their sheep flocks have been migrating for centuries between Tusheti in summer and Shiraki in winter.

Summer half year in Tusheti

Departure from Shiraki to Tusheti on May 1st. Arrival in Tusheti around May 30th In the summer months, the lambs grow quickly on the lush mountain pastures. The dams are milked until around July 15th.

Winter half year in Shiraki

Departure from Tusheti on September 30th with arrival in Shiraki at Nov.1. In the winter months, the new lambs are born from January to March. Each dam gives birth to 1-2 lambs.

Due to the global economic, cultural and social changes in Georgia and Georgian society, the continued existence of the semi-nomadic Tushetan pastoral tradition is acutely threatened and confronted with a complexity of existential problems that we consider to be entirely solvable. For the preservation of the cultural area of the Eastern Georgia region with its small-scale and relatively clean cultivation, the preservation of these agricultural pasture activities is necessary from various points of view:

Our association “Shepherds Life” would like to investigate and record sheep breeding in Georgia and work for its continued existence. The history of the Caucasus region and its culture is inconceivable without nomadic sheep farming.

We would like to secure the preservation of the intangible cultural heritage “sheep breeding” and promote economically oriented sheep breeding in Georgia and in the entire Caucasus. This includes the direct sale of wool, skins, meat, sausage, ham, milk and cheese and it requires a special effort to show the added value of products from animal welfare compared to factory farming for the consumer and for the environment.

Traditional sheep farming is part of a unique ecosystem made up of diverse components and protects soil, water, air and habitats for threatened plants and animals.

For many years we have dedicated ourselves to the unique semi-nomadic sheep farming in Georgia. Because of our close personal contacts with the shepherds and with our help, an impressive German-language documentary was made in 2005. Later a travel idea arose from this, which we offer with the company “Kaukasus-Reisen” under the name “Viehtrieb Tuschetien”. We carry this out annually with interested German, Austrian and Swiss guests.  We were able to contribute a small part to the appreciation of the Georgian shepherd culture with its impressive history, the traditions, the exciting legends, the language and the wonderful dances and songs. We have invited journalists and photographers to Georgia several times in the past. They have reported in well-known German media about their experiences with the shepherds.

In 2019, we decided to set up our own sheep farm together with two Tushetian shepherds, thereby helping preserve the shepherd’s tradition. For a long time we have noticed that the number of professional shepherds and herds in the country is decreasing and we can also attest to the significant effects this has on the environment and nature in Vashlovani and especially in Tusheti. We feel strongly our efforts will be of valuable assistance to the shepherds of Tusheti.

Impressions
All photos by Michael Bourgault